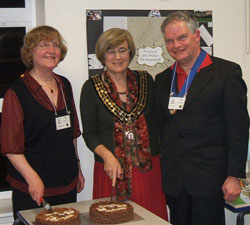 Hamwic Speakers celebrated the Club’s first birthday on 9th March. The Southampton based Club, which has recently also become a chartered member of  Toastmasters International, was first founded by Ken and Margaret Amy and a small number of other members from the Solent Speakers Toastmasters Club which is based in Fareham. At the birthday celebration, members also celebrated the signing up of the 30th member. A visitor from another nearby club commented that this was an exceptionally fast rate of growth for a new club.

A lively meeting with a theme of “Firsts” was attended by the Mayor of Southampton, Elizabeth Mizon. She gave an interesting 7 minute speech entitled “Being Mayor in the 21st Century” (apparently she is the 787th Mayor of Southampton). Jeremy Over evaluated her speech as being well constructed and informative. His only improvement suggestion was ‘moving away from the lectern’! Jeremy was voted Best Evaluator. Best Speaker of the evening was Pete Steele with “Paradise is already here! – The British Isles”, a knock-out speech full of poetic imagery to promote the message of what a beautiful country we live in.

One of our VIP guests, Councillor Ben Walker won the accolade of best topics speaker.

Margaret and Ken served yummy chocolate birthday cake in the break, and despite a jam-packed programme the meeting finished almost on time, with guests invited to post their comments on the website.