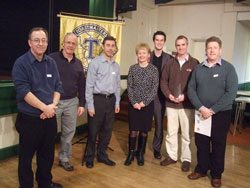 On  27th March 2010 Hamwic Speakers was proud to host the Area 42 Speaking and Evaluation Contests, which saw visitors from as far afield as Dorset and Brighton gathering at Totton to hear winners of branch competitions competing for the Area prizes and the chance to go on to District competitions and ultimately potentially national or even international contests. Hamwics very own Rich Watts, a previous Area competition winner, took part in the speaking competition, while Julie Street represented the Club in the evaluation competition. Sadly neither won their class, but this is a reflection of some very high class performances by the winners rather than the abilities of our own team.

A number of non-participating members were present as spectators and supporters, and it was a treat to see some really excellent speeches and to appreciate the styles of speakers from other clubs who we had not previously seen in action. As this was the first time we had hosted the competition there was more than the usual amount of nailbiting in the run up to it, but it all seemed to go well on the day even if some of the officer roles had to be assigned to willing victims, sorry – volunteers, on the day.

The competitions were preceded by three workshop sessions on Sparkling Impromptu Speaking, Dynamic Workplace Presentations, and Evaluate to Motivate. All three topics were highly rated by participants and all the feedback was very positive, encouraging us to run a similar format for events in the future.