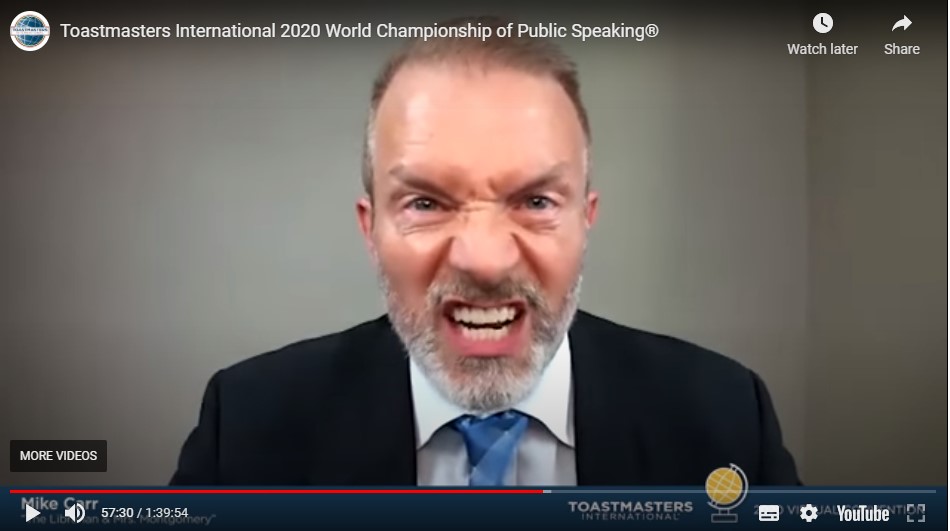 I needed to practise for Hamwic Speakers Evaluation contest so I evaluated last year’s Toastmaster International 2020 World Championship Finalists (click here to see the contest) and in particular:

The main objective was for me to practise evaluations, however, I found that I also picked up on a few reoccurring themes. Having a great online set up was one of them, the others are listed below:

All world championship contestants told stories with challenges and then had a compelling moral at the end of it, which I felt resonated with me as a Toastmaster.

Each speech contained one story and a powerful take home message, typically delivered towards the end. For more information on how to tell a short story see this blog post. 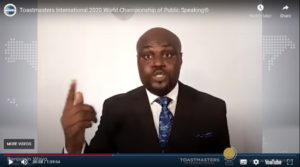 Figure 1: Wayo telling the compelling story about meeting his wife.

In Carrs winning world championship speech he starts with his face in the bottom left part of the screen. Through the speech he goes off camera, he moves in close slowly, he moves in fast, he stands at the side instead of centred and he walks and runs across. Every time you click through the speech you will notice he is standing somewhere different with a  unique gesture or facial expression.

Yang animates his story of approaching Jackie Chan in a restaurant by climbing stairs. Yang enacts the stair climbing on every occasion and it benefits the structure of the speech because we know whether he is at the door at the top of the stairs or whether he’s with his parents.

Wayo has the least amount of movement. I believe he could have really enhanced his speech with movement. His vocal variety was the best “she felt sooo gooooood”, but unfortunately it didn’t make up for the lack of movement. 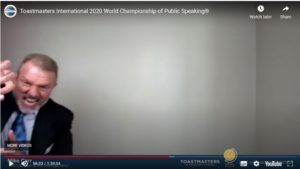 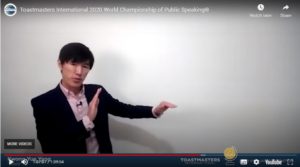 Figure 2&3: Carr and Yang moving around the screen

World championship finalists are both creative and original with their gestures. The creativity is inspiring and leaves a lasting effect.

Zappala has a fantastic bit of non-verbal communication in her speech at 51:40, for 14 seconds Zappala has no speech and just has gesticulation. I find it both original and powerful. Zappala also uses her hands as props, i.e a mask, which is effective and innovative and also Zappala shows her vulnerability through body language, for most of the speech she is looking up at the old friend, to show how she felt so small.

In my evaluation of Yang I say that I could watch the speech on mute and still understand what he is saying. My favourite gesture is when he gesticulates “career path”! It takes a creative mind to put a gesture to those words.

Carr’s facial gestures are brilliant. He both acts out and describes the facial gestures of Mrs Montgomery which leave for a lasting impression. It’s the second image that comes to mind when I think of his speech.

For more information on body language and how to use gestures effectively see Jacks book recommendations. 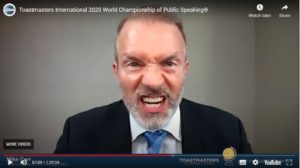 Figure 4&5: Zappala in her moment of non-verbal communication and Carr and his facial expressions.

Carr masters camera interaction by enacting the flashing from the projector and then blocking us completely. It’s hard to not be engaged when all this is happening in front of your face.

NB: The first time I watched Carr’s speech I couldn’t finish watching it. It was condensed with so much action and energy that it felt it was too much. However on reflection, Carr was the 5th speaker and by this time viewers may be losing focus and concentration, an injection of energy and action may be more of an antidote, than the overdose it felt for me.

When I think back to the speeches I don’t remember the words, I remember the images and my overall impression of the person. I don’t even recall the take home messages. Having looked into memory techniques it does seem that we remember images better than words and we remember things that are not quite the norm. Perhaps when judges and the audience reflect on a speech they are looking for the most memorable and the one that left a lasting impression. I also deduce from the above that creativity, especially non-verbal actions, play a big role in leaving a lasting impression. Be creative with your speech, not just with words but with tone and actions.

What makes a memorable speech for you? Please comment below.

NB: Bear in mind the story structure and tips above are tailored for the Toastmasters audience, there is an element of entertainment, self-development and motivation. The above observations will enable to you to deliver an effective speech to Toastmasters but probably not for a job interview or when presenting experimental data. Knowing the audience is fundamental to a speech. I’ll write a blog about this in the future.

This blog is written by Jack Irwin, Hamwic VPR. For more of Jack’s blogs on communication and public speaking see here.