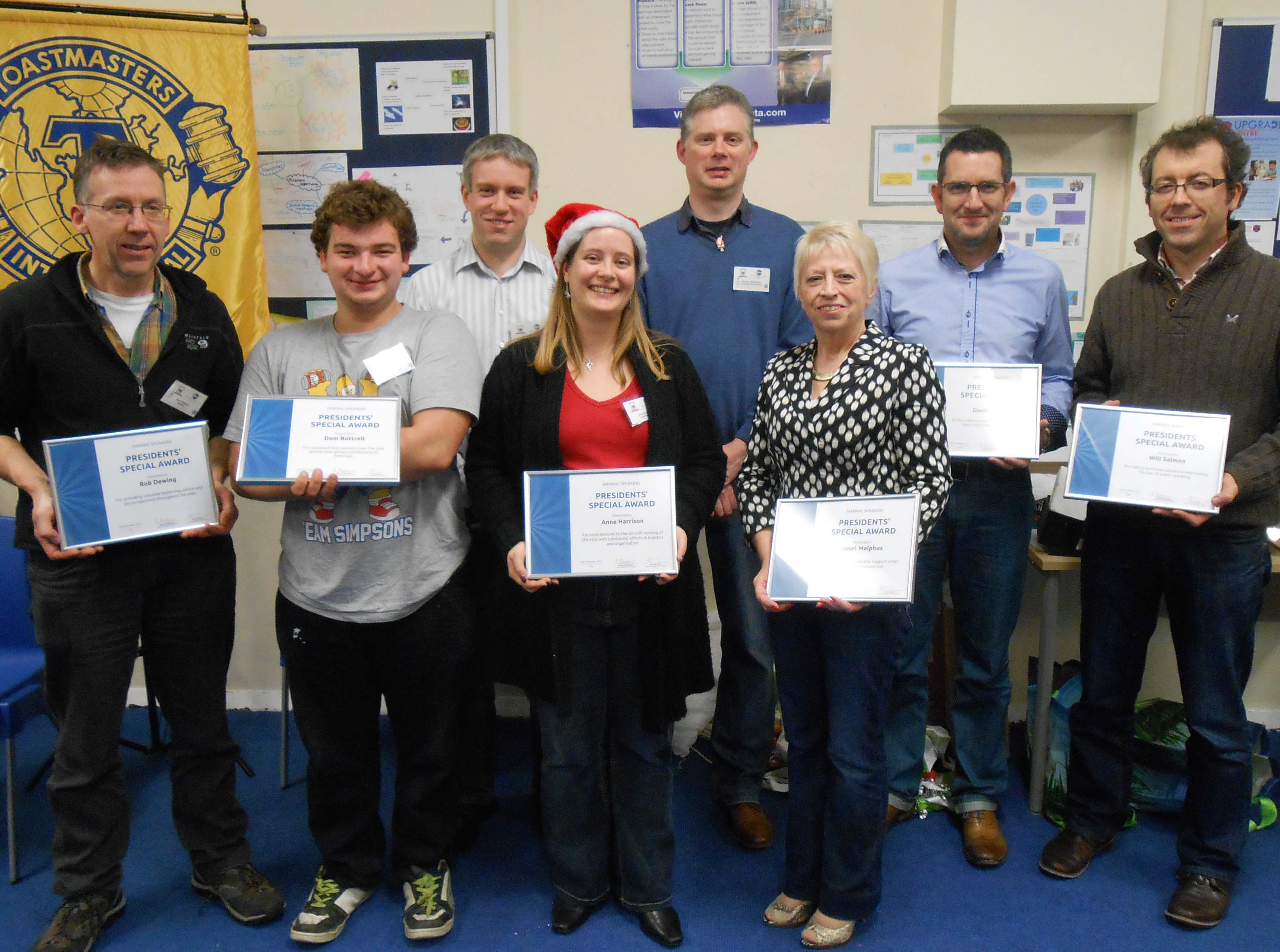 At our annual awards evening and holiday party in December, Hamwic Speakers celebrated our club members’ accomplishments in 2013.

Toastmaster of the Year

Nominated and voted for by our club, Diane Chamberlain won the Hamwic Speakers’ 2013 Toastmaster of the Year award.

This award recognises outstanding personal achievement and involvement with the club. Diane, who joined Hamwic Speakers at the beginning of 2013, began volunteering as Vice President of Education in June. Her positive attitude, public speaking success, and hard work and dedication as VP of Education made this a very well deserved award.

Diane says that the award “really is a great honour.” She feels that Hamwic Speakers “changed [her] life in the past year and improved [her] confidence about speaking  in front of people,” though she feels there is “still a long way to go.”

Quoting Nelson Mandela, Diane says “‘after climbing a great hill, one often finds there are many more hills to climb.’ However, it is nice when someone pats your back on the way up the first hill.” Diane would like to give her heartfelt thanks for the award.

To celebrate our members’ Toastmasters accomplishments in 2013, each member who finished a leadership or speech manual was presented with an Education Award.

All of our Education award winners worked extremely hard on their Toastmasters achievements, and Richard was “really pleased to complete his Advanced Communicator Bronze Award with Hamwic Speakers.” He felt that “the club’s supportive atmosphere and constructive feedback along the way were invaluable in doing this.”

To recognise exceptional club service and personal accomplishments, our President, Dan Harrison, and our immediate past President, Richard Blackman, selected six club members to acknowledge with a President’s Award.

Rob, who was recognised for his contributions to the club’s leadership strategy and volunteer work with the Prince’s Trust, “was really touched to receive the award.” Rob says that he just “enjoy[s] helping shape the organisations [he] work[s] within,” and the award “was completely unexpected as [he] hadn’t realised how much [his] input to leadership strategy had been appreciated.”

Will was acknowledged for his personal achievements and involvement with the club, and he was also surprised and delighted by the award. Will says that he “found the whole year a big challenge so it feels a real achievement to be recognised in this way.”

Our immediate past Area Governor, Janet, was “absolutely bowled over and very surprised to receive [the award].” She says that she “can’t really put into words how [she] felt on that night, and again just how shocked, and surprised [she] was to be presented with this.” The certificate is now proudly on display in Janet’s office!

Public speaking can be a challenge, but improving your communication skills and confidence in front of an audience can be incredibly rewarding. The awards evening was a very inspiring event, and it was a great way to end the year. Congratulations to all of our award winners, and also to all of our members who improved their public speaking and leadership skills in 2013!